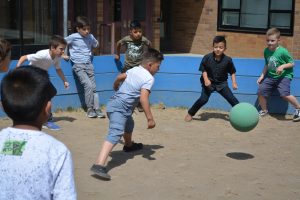 When a bright blue octagon with a 20-foot diameter turns up in the cafeteria courtyard of your school, you tend to notice. This was certainly the case among both staff and students at LaVenture Middle School when just such a structure arrived on campus this past May.

What exactly does one do with a giant octagon arena? Well, you play Gaga Ball, of course. This answer will likely bring about another question: what is Gaga Ball? No, it does not have anything to do with Lady Gaga. Most sources credit its place of origin as Israel, with the Hebrew word "ga" translating to "touch" or "hit". The game, however, has since become an overnight craze in the United States after two mothers and their sons, who had no formal place to play the game, opened the first official Gaga Center in Manhatten, New York in 2015. The Center's website describes the game as "a fast paced, high energy sport [...] dubbed a kinder gentler version of dodge ball, the game is played with a soft foam ball, and combines the skills of dodging, striking, running, and jumping, while trying to hit opponents with a ball below the knees."

Various camps and youth programs have since adopted the game into their regular activities. One such camp is the YMCA's famed Camp Orkila, where LaVenture 6th graders had their first, and now unforgettable, Gaga experience earlier this year.

Seeing the joy that stemmed from students playing the game at camp, The Boys and Girls Club of Skagit County persistently pushed for one that their members could enjoy. Through LaVenture Middle School's approval and a generous donation of time, parts, and labor by Chad Fisher Construction, the organization's dream to gift a legitimate Gaga Ball pit to a local site became reality. Dan Fisher, of Chad Fisher Construction commented on the project, “What the Boys and Girls Clubs of Skagit County offers to our community is invaluable and we are proud to support them. When we were approached to build them a GAGA ball pit we jumped at the opportunity because we have seen the positive impact they have had in other schools in our county. We would like to thank a couple of our partners who supplied materials for this, Tacoma Screw for the stainless fasteners and the Mount Vernon Building Center for their donation of lumber.”

Though many LaVenture Club members knew exactly what the blue octagon was when it arrived, staff were generally confused by the presence of the eight-sided enigma. One particular email thread between LaVenture staff titled "Is that a WADING POOL???" demonstrated the confusion: some were under the impression it was a pony arena while others were certain it was some kind of pool. Club members responded with immediate glee. "This is the coolest thing ever!" exclaimed 6th grader and Club member Landon Fowler upon the pit's arrival.

Although perhaps puzzling initially, LaVenture's Gaga Ball pit already feels like a school staple and has been put to good use during lunch, free time, and especially during Boys and Girls Club after-school activities. Now the most frequently-asked question is "When are we playing Gaga Ball?"