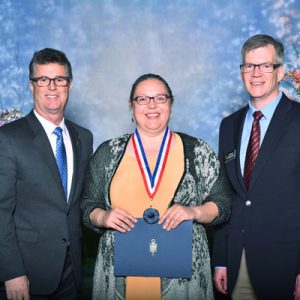 SVC President Dr. Tom Keegan awarded 20 students with the President’s Medal for outstanding academic achievement. To qualify, each recipient must be a graduating sophomore, have all A’s or A- grades, and have attended SVC for at least three quarters. President’s Medals were presented to:

The prestigious Charles H. Lewis Memorial Award was presented to Lucy Kesterson. Lucy describes herself as a non-traditional, first-generation returning student, a widow, a mother of three, and an advocate for justice, equity, and opportunities for expression. She was involved in numerous clubs, activities, and college committees on campus. In addition, she was named to the 2019 All-Washington Academic Team, and is a Presidential Scholar. Lucy graduated alongside her daughter, Elizabeth, and will transfer to Western Washington University to complete her Human Services degree.

The 1956 sophomore class of Skagit Valley Junior College established the annual Charles H. Lewis Memorial Award as tribute to Lewis, the first Dean of the College and a revered faculty member at SVC for 28 years.  The award is bestowed to a graduating sophomore who has been in attendance at SVC a minimum of one full school year and who best among their classmates exemplifies the qualities of Charles H. Lewis: