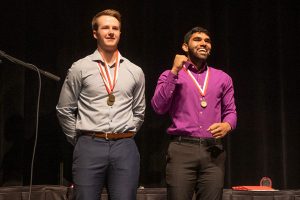 This coveted scholarship provides full tuition, books, and room and board for two years at any Washington state public college or university for students pursuing a bachelor’s degree in math, science, or engineering.

“It is with great pleasure that I award Danial and Jordon with this special gift, a scholarship that represents my father’s vision and generosity,” said Tessea McIntyre-Smith. “It is such a wonderful feeling to extend our family’s support to assist our community’s brightest individuals to help them achieve their educational goals and dreams.”

Danial Kahn attended SVC through the Running Start program and is a highly engaged student leader. This past year, he served as president of the Associated Students of Skagit Valley College for the Mount Vernon Campus. Danial also served on several College committees, including the Tenure Review, Services and Activities Fees, and the Student Technology Fee. In addition, he participated in SVC’s Science Club, Chess Club, and Calling All Colors organization.   (more . . .)

Danial will graduated last week with his Associate in Science – Transfer Track #2 degree with an Engineering Concentration. He will attend the University of Washington to pursue a bachelor’s degree and a career in Civil Engineering.

Of special note, Danial Kahn is not the first person in his family to receive the McIntyre Scholarship. His brother, Mohammad Kahn, also received the same scholarship in 2017.

Jordon Heppner has been an active member of the SVC community throughout his studies at SVC. In addition to being an outstanding student in the classroom, Jordon was a member of SVC’s Baseball team. In addition to his involvement on campus, Jordon also volunteered throughout the community. His efforts included devoting time each week to help area 4th and 5th grade students enrolled in the Children of the Valley program. Jordon will graduate this month with his Associate in Science – Transfer Track #2 degree with an Engineering Concentration. He will attend the University of Washington to pursue a bachelor’s degree and a career in Computer Engineering.

Sydney S. McIntyre, Jr. passed away in 1997 at 73 years of age. His wife, Georgia McIntyre, preceded him in death. Sydney graduated from University of Washington with a degree in Mechanical Engineering and was a lifelong resident of Skagit County, serving as Vice President of the Skagit Corporation for 20 years and directing its Engineering department. In addition, he served as a Skagit County Port Commissioner and was a member of the SVC Foundation Board of Governors. In 2010, Sydney S. McIntyre, Jr. was inducted into the Skagit Valley College Hall of Fame as an outstanding community member.

The Sydney S. McIntyre, Jr. Memorial Scholarship was established with a bequest of approximately $2.9 million in 1999 in an effort to inspire future generations of students to achieve their educational dreams. The provisions of this fund reflect his belief in and support for educational institutions in Washington and his desire to promote applied science careers. His daughter, Tessea McIntyre-Smith, helps to fulfill her father’s wishes by joining the scholarship committee each year as the recipients are considered and selected. The Sydney S. McIntyre, Jr. Memorial Scholarship is part of SVC Foundation’s scholarship program and is administered through The Seattle Foundation.

About the SVC Foundation: The SVC Foundation is a non-profit organization that works to identify, promote, receive, and manage all gifts to Skagit Valley College from individuals, corporations, foundations, and other organizations. Overseen by a Board of Governors and staffed by a professional development team, the SVC Foundation administers all gifts in accordance with donor wishes. Outstanding community support to Skagit Valley College has helped make SVC a nationally-recognized college with award-winning faculty and a community college that attracts, challenges, and empowers outstanding students who become successful in a global community. For more information about the SVC Foundation, visit www.skagit.edu/foundation