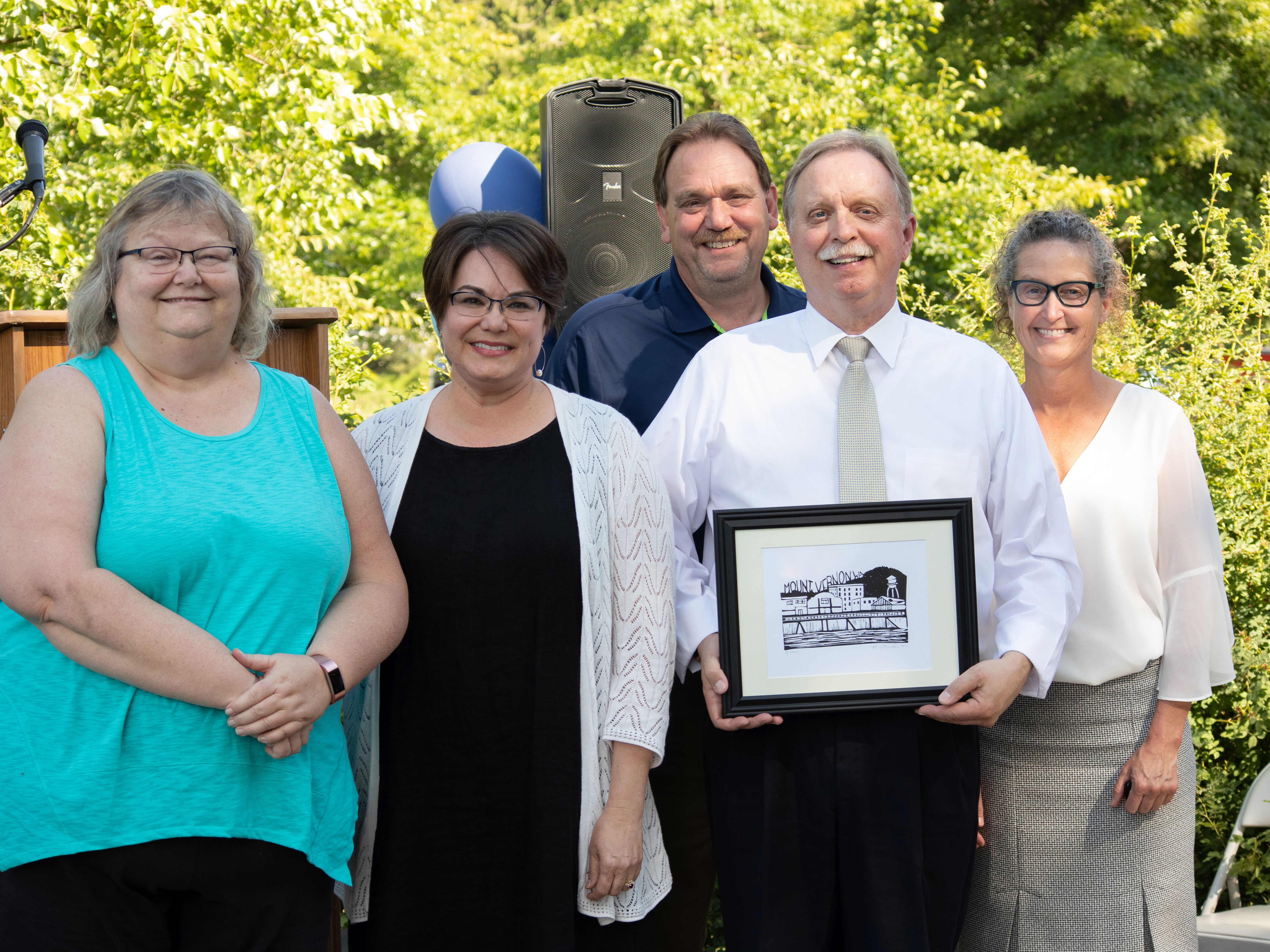 “The Mount Vernon Police Department, and the city of Mount Vernon itself, owe a great deal of gratitude and respect for what Chief Dodd was able to accomplish here over the course of his career,” Mayor Jill Boudreau said.

Chief Dodd’s career began July 2, 1979 as a police officer.  Three years later he was assigned to the K9 unit with his partner Keno.  In 1984 Dodd was promoted to Sergeant and two years later he advanced to the rank of Lieutenant.

"When I applied here 40 years ago, I chose Mount Vernon because it was a smaller Department,” Chief Dodd reflected. “And this community offers a better chance for an officer to become a positive force in the maintenance of life quality."

Mayor Boudreau promoted Dodd to Chief in November of 2012, and during his tenure he worked tirelessly to affect safety and community vitality.  Together with Mayor Boudreau, he changed how police services were delivered by looking at innovative ideas such as embedding a social worker into the police department and adding a law enforcement Park Ranger for police issues in our parks and on the public trails.

Dodd was instrumental in regionalizing services through functions like the County-wide crisis negotiation team, Skagit County Multi-Agency Response Team, Skagit County Proactive Policing Group; and he was part of the planning group for the Skagit County Community Justice Center.

Technology has grown rapidly over his career and Dodd was a key figure in integrating computer laptops into patrol cars, as well as implementing Opticom which controls intersection signals for emergency vehicles; public camera systems to extend police coverage, and advanced technological forensic tools to solve crime in a digital world.

During his time as Chief, Dodd has also led the agency through a number of critical events to include the Skagit River Bridge collapse, the Cascade Mall Incident, and the shooting of Officer Mike McClaughry.

Chief Dodd has not only served our community, he has taken an active role within it.  As a member of the Mount Vernon Rotary Club, he served as President and was awarded the Paul Harris Fellow award.  He volunteered on the Mount Vernon Christian School Board, the Skagit Valley College Administration of Justice Advisory Committee, and he taught Park Ranger and Law Enforcement classes at Skagit Valley College for over 20 years.  He's is himself a graduate of Skagit Valley College, as well as Western Washington University, the FBI National Academy (162nd Session), and he has held management and executive certifications from the Washington Criminal Justice Training Commission.

Two of the Chief’s fondest contributions to the Department were developing the 12-week Citizens Academy program which has just completed its 25th year.  The program has graduated over 650 citizens, and nearly 200 of those have gone on to serve as volunteers within the MVPD organization over the years.  A second program that Dodd has had a hand in launching is the Preparatory Academy, which just completed its 16th session.   170 students have completed the week long program that introduces high schoolers to a career in policing.

While the selection for a new Chief is in process, Mayor Boudreau has chosen Lieutenant Chris Cammock to serve as Interim Chief.  Chris, a life-long resident of Mount Vernon, graduated from Mount Vernon High School, Skagit Valley College and completed his Bachelor of Arts Degree from Central Washington University.  He joined the Mount Vernon Police Department in 1989 where he has served as a Patrol Officer, Sergeant and was promoted to Lieutenant in 1997.  Lt. Cammock has managed all of the various Divisions within the organization and is currently the Administrative Services Lieutenant.

“The touches and influences that Chief Dodd has had over his career will positively affect this community for generations to come,” Cammock said. “It’s a privilege to now have this opportunity to carry on the work of this Department, in benefit to our community; and I'm grateful to Mayor Boudreau and our City Council for their confidence as we go forward.”