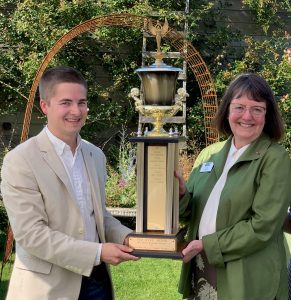 United Way of Skagit County presented Ann Caldwell, President of  NW Washington Region of US Bank,  with the Ted Reep Award last week at the Friends of United Way Skagit County Garden Party.  The award is given annually to a volunteer who has demonstrated outstanding commitment and service to United Way.

Board president Andrew Entrikin, Broadband Manager, Port of Skagit, presented the award, saying:” Ann keeps a diligent eye on our financials, asking thoughtful questions and offering sound advice.  We are a better organization because of her service.”    While accepting the award, Ann noted she comes from a family of servant leaders – her mother served on the United Way of Yakima for many years, including as their first woman president.  Ann’s grandfather on her paternal side as a member of the Yakima organization when it was still called United Good Neighbors.

Last year’s recipient, Bill Aslett, councilman for the City of Burlington and United Way’s campaign chair, stated: “In addition to her volunteer work, Ann and her husband Donald became Tocqueville Donors last year.  She Gives, Advocates, and Volunteers!”  Ann has been with United Way of Skagit County for ten years, serving as Treasurer for the past four years.

The Award began in 1985 and is named after long-time supporter of United Way, Ted Reep.  Ted served on the board for almost 20 years, bringing tremendous leadership to the organization and its annual campaign.