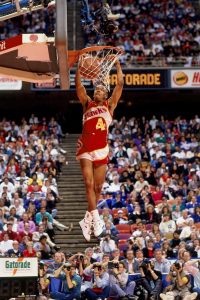 With a career that truly defied the odds, “Spud”, at 5’8”, became the shortest player to ever win the Slam Dunk Championship - at the 1986 All-Star Game - beating out Dominique Wilkins and Michael Jordan. Despite a stellar high school career averaging 26 points a game, he was not heavily recruited because of his size. Having faced challenges and obstacles learned on the court of the Turnkey Boys Club at an early age, he didn’t give up. He led Midland Junior College to the Junior College national title in 1982, and then would go on to play at North Carolina State and reach the Sweet 16 of the NCAA Tournament.

“Spud Webb’s personal story of perseverance at key points in his life will resonate and truly impact our Club members and community,” says Ian Faley, Associate Executive Director for the Clubs. “At each pivotal point, even in reaching the NBA, he had to silence critics through pure demonstration of skill and ability. You just can’t judge a book by its cover, and the same is true of many of the Club kids and teens we serve today.”

While the community will have an opportunity to engage with Mr. Webb at the Great Futures Gala, the event provides an ancillary benefit by bringing a notable Club Alum in to interact with youth, at their local Clubhouse. “Seeing how excited our members get, even when they have no direct connection because of a generational gap, is pretty amazing.” Ron McHenry, Club CEO explained further, “This is someone famous. They were a Club kid. They share their story and it is so similar to what our kids and teens experience. It makes a tangible connection to not letting anything stand in their own path to a great future.”

Sponsorships for the Great Futures Gala are going fast. Limited tickets will be made available to the public soon. For information about the Gala, or Boys & Girls Clubs of Skagit County, please contact Ian Faley, at ifaley@skagitclubs.org or 360-419-3723 x7.