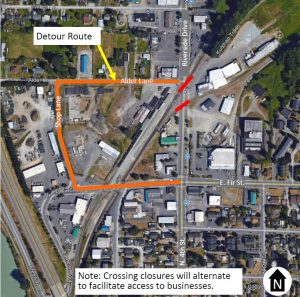 Driving over the railroad crossings on Riverside Drive in Mount Vernon ranks closely with root canals and dial-up internet on many Mount Vernon drivers’ lists of most aggravating life experiences.

However, beginning next Monday September 23, a thorough renovation of the crossings will provide local vehicles with some much needed suspension relief.

Smoother crossings at both the main line, as well as the nearby “spur line” crossings, are planned; along with significant pedestrian and safety improvements at the same location.

“Our drivers are definitely going to notice an improvement at this crossing,” Mount Vernon Public Works Director Esco Bell said. “And coordination of this project has been no simple task.”

The project represents several months of planning and synchronization between the City, the City’s contractor, and BNSF Railway; and will require a street closure of up to 5-days next week in order to complete the work. Riverside Drive will be closed to vehicle traffic from Alder Lane to Fir Street, with a detour route planned. Access to all businesses along the route will remain open.

“The public has been very understanding about all of the infrastructure improvements that are taking place around town,” Bell added. “We are really pushing to do all that we can before the weather changes for the worse. The good news is that this project will begin just as all of the current work on Riverside is wrapped up.”

The project is fully funded through the Federal Highway Administration at a cost of $473,200, and the work will take place from Monday September 23rd to Friday September 27th.

Project Description:
This project was developed in partnership with Burlington Northern Santa Fe railroad (BNSF) and installs two new concrete railroad crossing systems at the BNSF mainline track and the BNSF siding track immediately south of the mainline track to provide an ADA compliant railroad pedestrian/bike crossing and improved roadway alignment. Realigns the west and east sidewalk crossings over the tracks to reduce the skew angle and reduce risk of wheels getting caught in the gap adjacent to the track. Installs a new static signal wayside horn, LED signal lights, pedestrian bell on the NE signal mast, and pedestrian gate at the rail crossing to alert of oncoming train. Resign the vertical curve of the roadway requiring reconstruction of the sidewalk, curb, and road grade leading up to the track crossings.

Funding:
Funding for this project is through the Federal Highway Administration (FHWA).