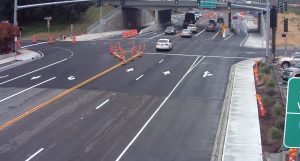 Construction of the College Way widening project, under Interstate 5 is nearing completion. Crews are wrapping up a few finishing touches, as the two lanes that have been added to the corridor are opening up for drivers this week.

The interchange now features an additional outside lane on both the eastbound and the westbound sides of College Way, and has some local drivers asking how the updates will impact traffic flow, as well as how they will navigate the changes.

“Simply put, these improvements are going to help traffic to flow more smoothly through this area,” Public Works Director Esco Bell said. “And we believe that the lanes have been marked very well, and that navigating the interchange will be intuitive for drivers.”

The $8 million dollar project was largely paid for by State and Federal funding, and included a Skagit County economic grant. Improvements began in early 2019, and crews were able to keep all lanes open to traffic in both directions for the majority of the duration of the work; causing very little disruption to daily commute times.

“We came up with a plan that would eliminate long backups, and we kept our overall costs down,” Bell said. “A project done this way may take longer to complete, but it’s done with minimal impact to residents, and the project budget.”

The widening project is expected to accommodate increasing traffic volumes, and at a fraction of what the cost would be to completely rebuild the interchange.