Mayor Boudreau and City Council have announced the process for appointing a new city councilmember to serve Ward 1.

The plan is to fill the position—left vacant after former councilmember Erin Moberg resigned due to health concerns—by the beginning of 2021.

City Council vacancies are filled by an appointment of the City Council.  Those interested in applying must be a registered voter living in the City of Mount Vernon, having resided within City limits for at least 1 year; and must be a resident of Ward 1.  The appointee will serve until a Ward 1 candidate is elected by the public in November of 2021.

Applications and more information are available on the City’s website (http://www.mountvernonwa.gov/CivicAlerts.aspx?AID=378). Applications will be accepted through November 23rd. Selected applicants will be interviewed publicly by Council on December 16th. 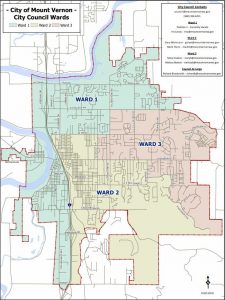