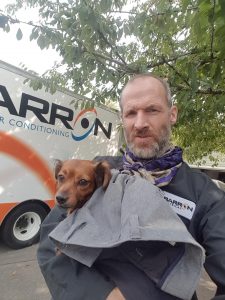 The quick response of a nearby HVAC crew to a Bellingham fire saved a dog and enabled firefighters to extinguish the fire before it destroyed the house.

“Chris and Josh were outside and heard a fire alarm,” Haley said. “I went out in the street and then could see smoke coming from a house two doors down from us.

“I rang the doorbell and nobody answered, but I could hear a dog barking and then saw it through a window. Since the door was unlocked, we went in to see if there were any people there.”

Despite a significant amount of smoke on the ground floor and 5-foot-high flames upstairs, Haley made a quick search of the house. “Smoke was pouring out of the upstairs windows,” Haley said. With nobody apparently home, Haley and Smith then tried to corral the small dog.

“The dog was scared, running around and hard to catch, but Josh was finally able to grab it,” Haley said.

During this time, Foster called 911. “When our crews arrived, there was heavy fire on the backside of a two-story house,” the Bellingham Fire Department reported on its Facebook page. “Our crews quickly found the origin and extinguished the fire.”

The dog eventually was given to the care of the Whatcom Humane Society, which was able to contact its owners.

Committed to improving lives through its Air Solutions team and Certified Home Performance Experts, Barron provides a wide range of heating, cooling, solar, electrical, plumbing, and indoor air quality products and services, as well as a large selection of stoves and fireplaces in its Firelight by Barron showrooms.

Barron Heating AC Electrical & Plumbing has become one of Northwest Washington’s largest and most respected home performance experts with showroom locations in Ferndale and Burlington. Service providers are trained at the Barron Technician School in Ferndale. Approximately 200 local employees serve customers along the I-5 corridor from Blaine to Marysville, Oak Harbor to Concrete, as well as the San Juan Islands.

Its Ferndale location is at 5100 Pacific Highway, along the east side of Interstate 5 between West Smith and Slater roads. For information, call (360) 676-1131 or visit www.barronheating.com.