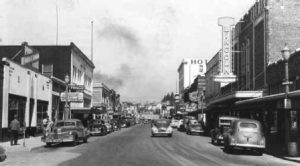 Mount Vernon’s earliest recorded settlers, Jasper Gates and Joseph Dwelley, likely first stopped in the area in 1870 because the Skagit River was not navigable beyond this point due to enormous, ancient log jams. In 1876 the log jams were removed allowing travel and commerce to flow, with Mount Vernon positioned as an important transportation and trading center along the river.

In 1877 Harrison Clothier purchased about 10 acres from Jasper Gates along the riverfront for $100. Clothier and partner Ed English built a store, secured a post office and laid out four blocks of a town site he named Mount Vernon in recognition of George Washington’s Potomac River estate. In 1883-84, Whatcom County was divided and its southern portion became Skagit County.

Mount Vernon eventually beat out LaConner and Anacortes to become the County Seat in 1884 and was incorporated six years later on June 27, 1890, with a population of about 1000. By 1889, more than a dozen sternwheelers worked up and down the Skagit River serving the needs of homesteaders, prospectors and loggers at numerous mining and logging camps.

The Great Northern Railway finished construction of its rail line through Mount Vernon in 1891. Major floods in 1892 and 1894 motivated the construction of a massive levee system. More than likely these floods were the reason homes were constructed on “the hill” as it was referred to then and now. As the residential population began to shift to the hill, other public buildings including Lincoln and Roosevelt schools were also constructed there. By 1912, population was listed at 2,600. For more history about Mount Vernon, click here. From HistoryLink.org 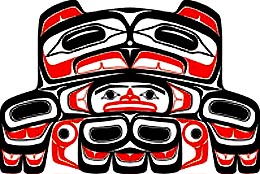 Local Native American Tribes Humans have existed within the basin of the Skagit River for more than 11,000 years, and the region is the ancestral land of the Skagit Tribe, a branch of the Lushootseed linguistic group of Coast Salish. For centuries, they led a largely sedentary life of hunting, fishing, and gathering, living in small groups at sites from Whidbey Island to the west and along the course of the Skagit River to the foothills of the Cascade Mountains in the east. In more recent times, tribal identity split into two divisions that came to be known as the Lower Skagit and Upper Skagit.

The Upper Skagit peoples, who ranged from near today’s Mount Vernon east to the Cascade Mountains, were further subdivided into 10 or 11  small bands that lived in close proximity to the river. Those living nearest to present-day Mount Vernon were called the Nookachamps (Nook-wa-cha-mish in the Native language), and a creek east of the city still bears that name. Both the Upper and Lower Skagits were signatories to the Point Elliott Treaty of 1855, which did not serve them well.

The Lower Skagits were consolidated with other Coast Salish tribes and bands into the Swinomish Tribe, and were relocated located to the Swinomish Reservation on Fidalgo Island in 1873.

The Upper Skagits were deemed too scattered to merit status as a separate tribe or a right to their own land. Most were taken to the Tulalip and Lummi reservations, but many drifted back to their traditional lands along the Skagit. Through the decades of this diaspora, they somehow managed to maintain tribal identity, and in 1974 one of the manifold inequities of the Point Elliott Treaty was redressed when the federal government granted the Upper Skagits full tribal status. The tribe established a reservation on an 84-acre parcel of land east of Sedro-Woolley.